skip to main | skip to sidebar

"AP Action's endorsement of me is encouraging because it shows that its members understand my commitment to represent all members of our community and that they're serious about tackling our City's financial crisis," said Perillo.

The organization scored the candidates as follows:

Go to http://www.apaction.org/ to see comments the PAC made on various criteria for all candidates participating. The candidates' questionnaire responses are also posted there.

"While I do appreciate AP Action's endorsement, I strongly support all members of the Time4Change ticket," said Perillo. "We share the same vision for Asbury Park and the changes that need to be implemented to stabilize the budget and bring together the diverse communities that comprise our vibrant City."
Posted by Time4Change in AP at 6:03 AM No comments: 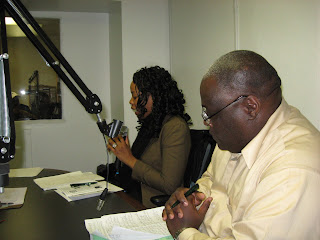 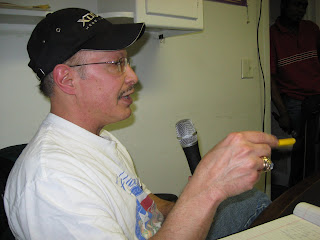 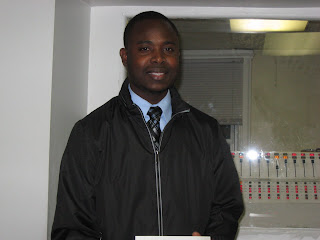 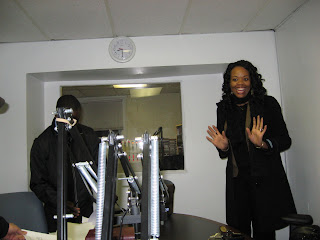 You can call in to Asbury Park's own radio station, WYGG 88.1 FM and http://www.goodnewsradiofm.org/, to question candidates for council on Tuesday and Thursday nights, from 8:30 - 11 pm. Time4Change has been on several times. The other candidates, including the incumbents, have yet to acknowledge their invitations.
The call-in number is 732-775-0821.
Photos: The beautiful Jean Baptiste does translations for us from English to French Creole and vice versa. Time4Change candidate Tony Perillo (in baseball cap) answers questions on the city's finances and stalled redevelopment. Duckens Sejour is the WYGG News Director and the other gentleman is Amsden Bernier, a City resident who served on the Board of Education has also questioned candidates on the air.

WYGG is providing a valuable service with this free forum. Candidates and citizens alike should take advantage of it before election day May 12.

Posted by Time4Change in AP at 5:41 PM No comments:

Time4Change candidates had their interviews with AP Action today, Sunday, April 26.
I found the members to be very open and interested in finding the best candidates for council. They asked many questions and yet still left enough time for me to interject thoughts of my own.
I appreciate their going to the trouble of researching and interviewing the candidates and endorsing their picks. Regardless of who they choose, AP Action is a valuable service for our community.
Posted by Time4Change in AP at 5:33 PM No comments:

Please come out to the Candidates' Forum at the VFW Hall, Lake Avenue and Bond St., Asbury Park, at 7:30 PM, on Monday, April 20th.
Audience members will be able to ask questions via Marie Curtis of the League of Women Voters, who will be officiating.
See you there!!
Time4Change

If you see the Online Report on the APPress website of today's press conference to announce the beginning of the West Side Redevelopment, for which we've learned there are no funds ready, you might miss Time4Change's opinion on this. So here is our press release, which the reporter barely quoted.

Bulldozers and backhoes are not going to be standing behind the current City of Asbury Park Council members when they hold their phony ‘ground breaking’ press conference on Friday April 17th, at Springwood and Atkins avenues.

They can say they are ready to begin construction of the long awaited Westside development, but it is only words. There is no city funding ready to turn on tractors and no July 17th construction start for the long-awaited permanent Senior Center for the elders of Asbury Park, as Deputy Mayor Jimmy Bruno announced at Asbury Tower on April 6th. Once again, this council is treating the citizens of Asbury Park like gullible children to be lied to in return for desired behavior. In this case votes! Let’s look at the facts regarding these projects:

- The Sisters Academy, an expansion of a private religious school, is wholly privately funded. Why is the Council even taking credit for this?
- The 611 Market project will be privately funded. Its start date is unknown.
- The Springwood Commons project is awaiting approval from State funding sources. Project start date unknown.
- The Springwood Center project, which is to include the new senior center that our senior citizens have been promised for 8 years has no funding yet. And the most optimistic construction date, according to city officials, is “Fall 2009” – if funding materializes.

“At the Meet the Candidates event, hosted by the Asbury Tower’s Residents’ Association, on April 6th, the incumbent Council told the citizens attending that the City would be breaking ground on Springwood Avenue developments,” notes Time4Change candidate Tony Perillo. “Did Deputy Mayor Jim Bruno say, ‘Ground breaking on the Senior Center will start July 17th’, simply to get the seniors’ votes? It’s desperation! We’ll let the voters decide.” Sound files of Bruno’s and the other candidates’ statements can be heard at www.Time4ChangeinAP.blogspot.com. Click here for Bruno's remarks.
“It is obvious that this council is lying again to our seniors, who were also initially told that their boardwalk would be renovated,” said Time4Change candidate Maureen Nevin. “Now they’re told it’s going to be replaced by a nature trail tucked between sand dunes.”

“Tomorrow’s much heralded ceremony is a shameless bit of pandering on the part of a council that has continued to fail the most vulnerable members of this community, the poor, disadvantaged and elderly,” said Time4Change candidate Rosetta Johnson.
--30--
Posted by Time4Change in AP at 1:35 PM No comments:

You’re right that redevelopment plans must be dealt with “openly”, which would be a first for Asbury Park. But why isn’t anyone asking why the current Council did not publicly disclose the status of Metro Homes, a developer facing foreclosure on its Esperanza project, nor its negotiations with Asbury Partners? Who are the lenders? Have they even been named let alone quoted? Too many negotiations have been conducted behind closed doors with costly consequences -- yet they continue.

I agreed with much of your editorial with the exception of what I was supposed to have said – that Asbury Partners’ “bank had foreclosed on its loans”. You referred to this statement as a rumor but it was obviously extracted from your reporter’s article on Asbury Partners wherein she misquoted me. What I actually said at the Candidates’ Forum held at Asbury Tower on April 6, 2009 was that Asbury Partners’ “lenders are ready to foreclose on them.” (You can hear the statement in a sound file at http://www.time4changeinap.blogspot.com/.)

I’m somewhat amazed that it took my comment at a public forum to get your paper to report on the dire financial situation on the Waterfront. Asbury Partners verified my statement by elaborating for you on its current negotiations with its lenders, further validating my statement. It should be obvious to anyone that lenders do not voluntarily offer to restructure loans unless there is a danger of default.

This was not just a lucky guess on my part. I’ve made a living negotiating contracts and managing the finances for a Global Fortune 50 Company. Managing a city, even a small one, undergoing a multi-billion dollar redevelopment at any time, let alone during these economic times, requires expertise and experience. That’s why I’m running with the Time4Change ticket for election to Asbury Park’s City Council this May 12th.

The Coaster has an ongoing series in which it poses a different question each week to the the four different tickets running for election to Asbury Park City Council this May 12th.

Week 1 - What is the most important problem facing Asbury Park and how would you address it? Click here for our answer.

Week 2 - Asbury Park has changed much over the last few years, with the addition of new businesses both downtown and at the boardwalk. Safety, however is still raised as a concern. How would you address the safety issue or the image of a safety concern? Our answer

Week 3 - What is your vision for redevelopment over the next four years? Our answer
Posted by Time4Change in AP at 1:56 PM No comments:

'Ocean Mile': a "Comedy" about redevelopment...(click invitation to enlarge)

Posted by Time4Change in AP at 1:40 PM No comments:

S. Maureen Nevin
Maureen Nevin, an independent journalist who has lived in Asbury Park for 10 years, plans to seek a seat on the City Council in the May election.
“I’ve tried everything else to get this city to practice open government, to share its decision-making with the people it serves,” Nevin said. "I’ve decided to give this, too, a try.”
From The Coaster, March 5, 2009. For a longer bio, click here.
Posted by Time4Change in AP at 8:10 PM No comments:

The Question posed to the candidates on Monday night, April 6th, at the Candidate's Forum at Asbury Tower was as follows:
"This is a yes or no question. Are you willing to align yourself with the community will to publically oppose the building of the Bradley Cove Townhouse Project in front of Asbury Tower?"
Posted by Time4Change in AP at 7:37 AM No comments:

http://www.app.com/article/20090409/NEWS01/90409015/1282/LOCAL06
See today's Asbury Park Press (link above)to learn what the city has been doing behind the scenes with Asbury Partners, which now admits it's trying to restructure its debts with lenders.
Reporter, Nancy Shields, quotes the source for the story being Anthony Perillo, a candidate for AP city council. She doesn't identify him as part of the five-member Time4Change ticket. Shields quoted from what Perillo said at the mic during his 3-minutes in the Meet the Candidates Event at Asbury Tower. During the same event incumbents actually called the seniors in the audience "narrow-minded" and "myopic" for objecting to the construction of a 15-home development between their building and the ocean.
Shields never attempted to interview Perillo after the meeting, even though he lingered until after Shields had left. Instead, Shields made small talk with Time4Change candidate Kevin Michel about the various night spots in Montclair, where he went to college.
As for the story, where is the interview with or comment from The Partners' lenders? Who are the lenders?
Why did the city meet with the partners to discuss their financial wherewithall behind closed doors??? This is the city's future. Don't we have a say in it? The two sides, according the Press, have decided the way to go is more affordable housing. Where's the public's input on this? Do we have to hitch our wagon now to the same broken caravan?
Posted by Time4Change in AP at 5:18 AM No comments:

Time4Change in AP
Wonder City of Asbury Park, New Jersey, United States
The Time4Change slate is running against the Asbury Park City Council in municipal elections this May 12th. We want open and transparent government. Too much has been transacted behind closed doors with power brokers. We are Rosetta Johnson, Maureen Nevin, Anthony Perillo, Elisabet Pacheco, and Kevin Michel. Together we can represent new and long-term residents, whether Straight, Gay, Transgender, White, Black, Mexican, Latino, or Haitian residents. This site contains a brochure with our bios, our platform issues in brief, and a pre-election straw poll. It also has our answers to the questions posed by The Coaster newspaper. Please let us know what you think by emailing nevinforcouncil@maureennevin.com